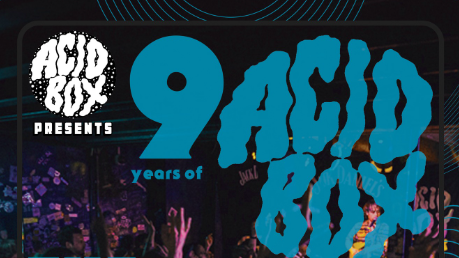 Another year older and still not much wiser…
We’re celebrating NINE YEARS of Acid Box this December!

Brighton-based Physics House Band began honing their psychedelic experimental rock sound at a relatively young age. The group, first gained attention when they released the track “Titan,” and the video received many hits on YouTube in a short space of time. In 2013, the band released their debut album Horizons/Rapture, demonstrating a maturity in their sound with a 26-minute-long psychedelic trip through musical styles, moods, and aural textures as a six-track album. The band sourced a vast array of analog instruments for the creative process of the record, from a Steinway Grand Piano to a Mark III Fender Rhodes, a B-3 Hammond Organ to a 1973 Ludwig Vistalite Drum set, and a selection of vintage Moog synthesizers. ~ James Pearce, Rovi

It’s been a bumpy few years for the music industry and we’re still not out of the woods just yet, so we want to say a gigantic thank you from the bottom of our acid hearts for always supporting us and seeing us through another year! We can’t quite believe it’s been nine years!!!!