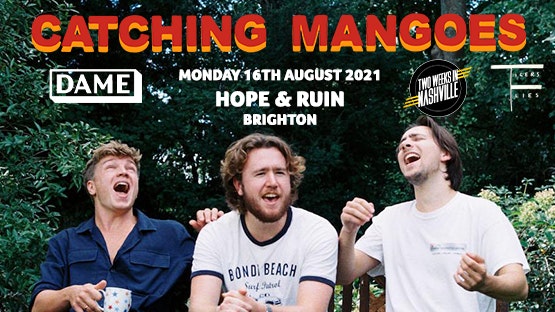 The Hope & Ruin
18+
Share
Buy from Fatsoma
Buy from Skiddle

Catching Mangoes are a three-piece rock band, George, Max and Dan, based in Brighton, UK. After forming in around 2016, they have played relentlessly around the UK and have recently recorded their debut album ‘Kevin’s Town’ in Brighton.

The album follows the tale of a young boy named Kevin on his adventures, escaping his home town in search of the truth about himself and his fellow townsfolk. In trying to figure out the mystery surrounding his long-lost father, Kevin comes to realise that only he can save his town from a terrible fate.

DAME’s brand of alt-pop has been described as ‘superb songwriting marrying glitzy production in a wonderful, confetti-filled ceremony,’ reminiscent of artists such as MUNA, Sigrid and Pale Waves.

DAME formed at the University of Birmingham when singer Shannon was signed to New Street Records. She found George crying outside the Med School, Jake getting kicked out of an Open Mic, and Matt on Tinder and DAME was born. The band have toured the U.K. and established themselves as a strong live act, building fan bases in both Birmingham and London.

Two Weeks In Nashville are aiming to recreate the rawness, the energy, attitude and dynamism of the greats such as The Stones, The Who and U2, with a modern twist to real instrumentation in a genre that desperately needs something fresh and ‘real’. The young rock collective honed their craft on stage with sell out London shows and have featured on MTV Rocks. To see them live is a real event, connecting with their audience and generating a feel good atmosphere that leaves the audience always wanting more.

Originally hailing from Brighton, Tigers & Flies moved to Manchester to study last year and have already cemented themselves as a staple act in Fallowfield’s vibrant nightlife. You can most likely catch these guys delivering their fast and rhythmic style of jangle pop in a sweaty common room gig or in some of the more alternative local venues such as Fuel Cafe or Big Hands. If you like feel-good indie guitar tunes and sipping on a nice pint of craft beer, this is the band for you.