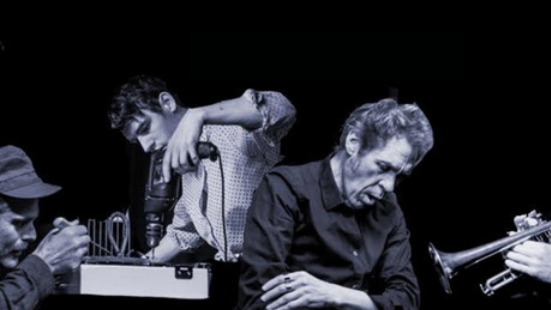 CHOPCHOP play eclectic songs that veer from super-bumping agit-funk to angular jazz-punk and beyond. Led by the gesticulations of Galician performance artist Xelís de Toro, the band whip up a tense and exciting brew of sounds live, and have been described as “a fantastic life affirming noise” by BBC Radio 6 Music.

“CHOPCHOP’s music snakes round its orator like a slippery thing, cymbals replaced by the clatter of hubcaps on toms, cutlery-jammed guitars – there’s an itchy jazzy vibe to the melodics, fuelled by a fertile imagination full of bruised shapes and punkish angles.” – FREQ

“Featuring tightly wound jazz and electro reggae syncopations that would make a maths teacher proud, the rhythm section is so locked in they may never be free from each other. Frontman Xelis De Toro spins weird, far-flung fairytale yarns, half sung and half spoken, whilst synths, guitars and brass stutter and start all around him. The result defies genre, but we’d like to bet that if he isn’t already, David Byrne would be a big fan.” – Brighton Source