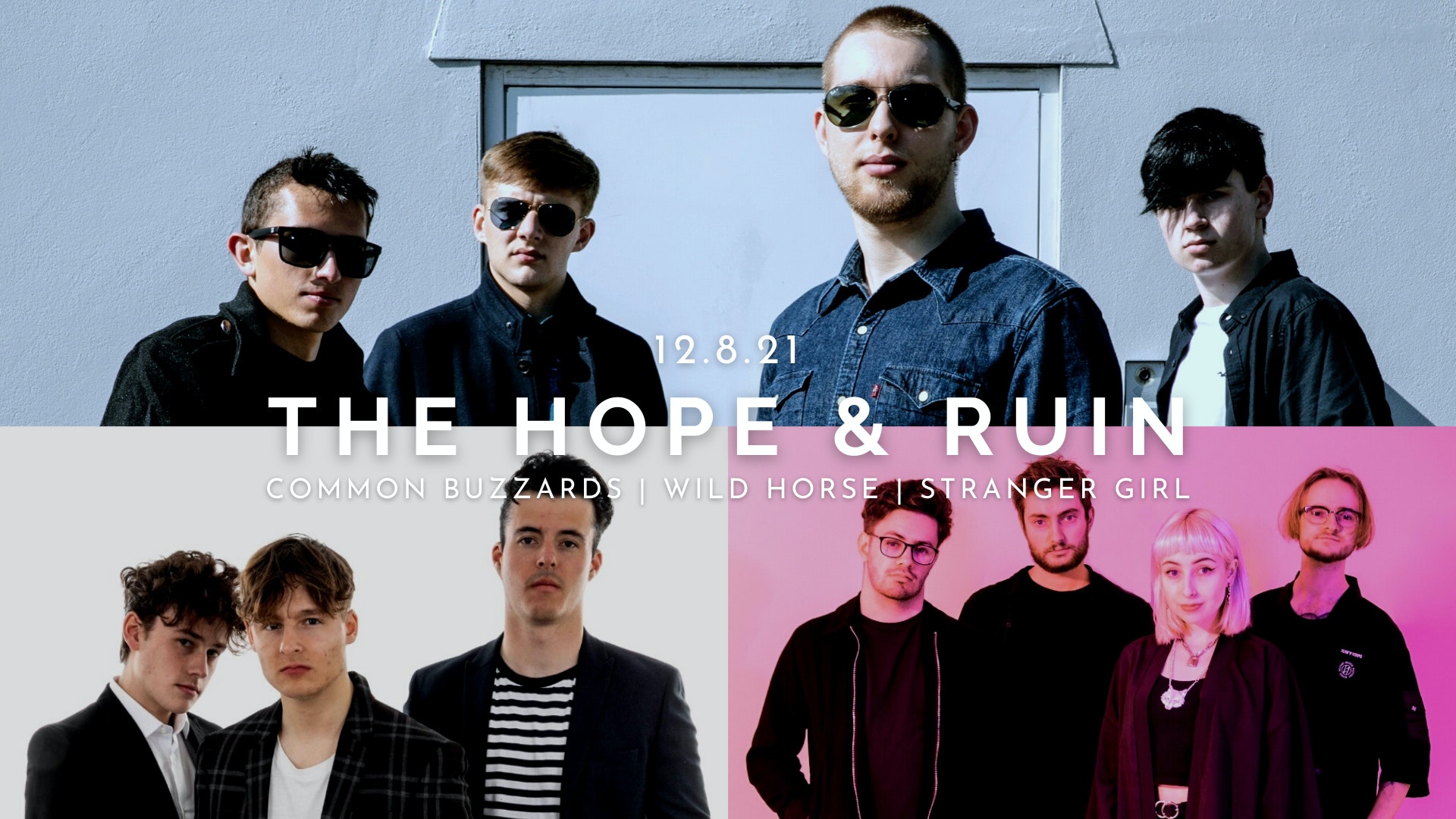 The Hope & Ruin
18+
Share
Buy from Fatsoma
Buy from Ticketsource

The four-piece, recently crowned winners of the Thame Town Music Festivals’ Peoples Choice Award (2020), released their debut EP Super Soul in December of 2019. It included four songs that had been key to the band’s success and progression in their first twelve months of performing. Opportunities started to arise, and in February of 2020, BBC Radio Kent studios called on the four to become their house band for an afternoon. Their debut single Personal Space received overwhelming feedback from various blogs and radio stations and was featured on BBC Introducing ‘The South’ and aired on both BBC Radio Sussex & Surrey.

They have showcased their music at some of the most well-renowned venues in the south-east of England; The Tunbridge Wells Forum, Hop Yard Brewing Co (Forest Row), and The Hope & Ruin (Brighton) too name a few. With the boys due to perform on the main stage at the Thame Town Music Festival and open the Priory Live Music Festival with Toploader; recognised most of all for their cover of King Harvest’s US hit “Dancing in the Moonlight”, headlining, the boys will be flying high by the end of the year.

Championed by BBC Introducing and critics from both sides of the pond, Wild Horse are prodigious in every way. Jack Baldwin (18), older brother Henry Baldwin (21) and friend Ed Barnes (19) on drums gel together flawlessly to form irresistibly catchy indie rock, always uniquely infused with their diverse tastes.

Lyricist Jack takes inspiration from daily life, relationships, and (naturally) the experiences of being a politically charged Gen Z-er living in a chaotic social and political landscape. With an extremely mature song writing style far beyond their years, Wild Horse continue to excite, engage and captivate their ever-growing audience with each release.

The East Sussex boys are renowned for an exciting, powerful stage show, having honed their craft from an early age at all the iconic venues in London & the South East as well as several festivals, often playing the same stages as many of their heroes once did. The reviews or their songs have been brilliant and extensively played on many radio stations worldwide. Their tracks & albums are available on all major platforms.

With 4 full albums already under their belt, more are always incoming with double single ‘Can’t Stop / The Room’ released in December and recording about to start on album number 5.

“One of the most promising new guitar bands we’ve come across, Wild Horse just keep getting better. Their song “CAN’T!” is further proof that well, they can!” – BBC Introducing – 27th May 2020

Stranger Girl are a Brighton-based indie pop band. Their first trio of releases came onto the scene in 2019, which saw successes such as features on BBC Introducing South’s Track of the Week, and recognition on various popular blogs including Louder Than War and A&R Factory. The band have also seen placements on recognised playlists such as the Spotify curated ‘Hot New Bands’, and have secured headline spots at gigs across Brighton and London.

In 2021, Stranger Girl plan to release several singles in the run up to their debut EP. Taking influence from the likes of Blondie and The Strokes, the band interweave classic indie sounds with the likes of modern nerd-pop outfits such as Indoor Pets and Weezer, with an underlying nod to the pop-punk sounds of the noughties. As a result, Stranger Girl enter the scene with vibrant and explosive pop melodies, alongside emotionally honest lyrics that explore anxiety, self-doubt and navigating life through your twenties.

Stranger Girl brings together pop-rock and 80s-pop with a contemporary indie edge..’ – The Other Side Reviews