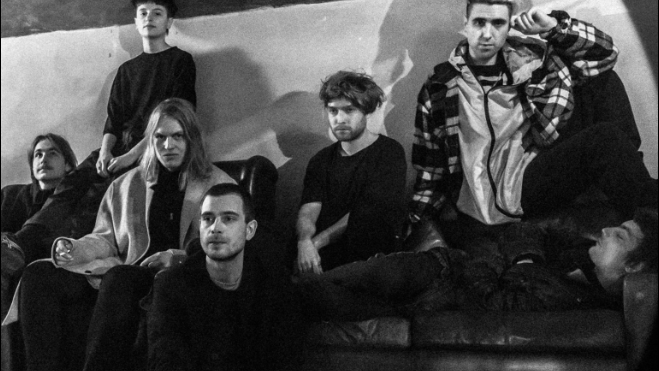 Flying Moon In Space are a six-piece band from Leipzig, Germany born out of live improvisations that are known to last hours at a time. Having clocked-up nearly fifty shows in their home-city alone, as well as support slots with The Holydrug Couple, Elephant Stone and The Sweet Release of Death and a couple of headline tours around Europe, the group have now signed to London-based label Fuzz Club for their self-titled debut LP. A shape-shifting blend of driving Krautrock aesthetics, vivid psychedelic pop and techno-indebted electronics, Flying Moon In Space’s ambitious debut is due for release December 4th 2020. ? Although they cite influences that span the likes of Can, Neu!, Brian Eno and Godspeed You! Black Emperor, ‘Flying Moon In Space’ is an album indebted to the band’s own experimental live approach more than anything else. Their improvised live shows typically see them perform with four guitars, bass, drums and vocals, resulting in huge walls of sound that are awash with hypnotic motorik beats and orchestral walls of reverb. Talking about the album, they say: “The energy that comes up playing live with that amount of people takes our perception of music to another dimension. We developed the whole album during our live shows in 2019 so they really capture a certain moment for the band.”