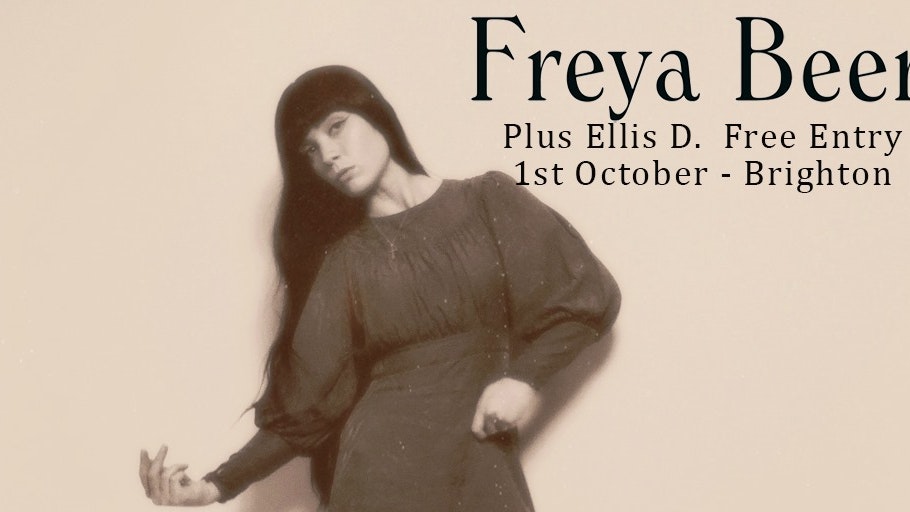 Freya Beer plays a free entry show at The Hope & Ruin (downstairs) on Thursday 1st October 2020 with ELLiS⋆D in support.

Tickets for the original show in April ARE NOT VALID – please rebook tickets for this show.

Get free guaranteed entry tickets from: http://lovethyneighbourmusic.co.uk/
Plus Dice

Originating from West London but now residing on the south coast, Freya Beer deftly mixes poetical lyrics with a distinctive sound, often drawing influence from the likes of Patti Smith, Bat for Lashes and Nick Cave and the Bad Seeds.

In 2019 Freya launched her own label Sisterhood Records and released “Dear Sweet Rosie”. The single was recorded in Manchester and accompanying Freya is ‘I Am Kloot’ Andy Hargreaves on drums. The song draws from a number of literary influences including Allen Ginsberg’s ‘An Asphodel’ and Anna Sewell’s ‘Black Beauty’.

Freya has been made a firm favourite by Marc Riley at BBC6 Music and will be playing a live session for his Radio 6 show on 17th February in Manchester. Seeing her live, Freya holds her own on vocals and electric guitar, accompanied by a drummer, making a huge and mesmerising sound that leaves the audience captivated.

Plus support:
ELLiS⋆D: As a generation falls deeper into despondency over a seemingly non-existent future, ELLiS·D takes fear, hope and a touch of melancholy to create unapologetically honest, and at times frantic lyrics.