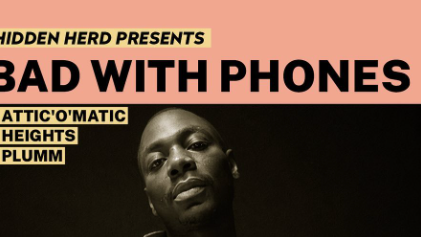 Raised in South East London, Bad With Phones started out playing in a church band where he would secretly play secular R&B riffs in the middle of church proceedings for his own amusement, sparking his rebellious counterculture spirit.

Inspired by the likes of Bootsy Collins, Bad With Phones found inspiration from Black artists who went against the grain and were celebrated for it. Attending Westminster University with fellow classmates Michael Kiwanuka and Paolo Nutini, Bad With Phones developed the knowledge, songwriting and musical performance that led to the unique BWP sound: a cross-contamination of electronic beats, guitar and R&B that has now collectively racked up millions of streams on Spotify. Fresh from @greatescapefest and, more recently, @endoftheroad 2022, Bad With Phones’ live show is not to be missed.

Plus support from:
Attic’O’Mattic
Heights
Plumm