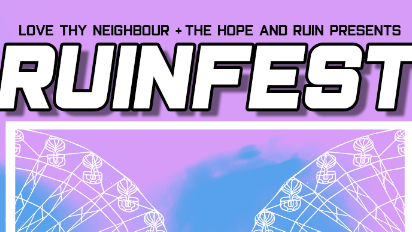 Love Thy Neighbour and The Hope & Ruin presents:

LTN’s Ruinfest returns with BABii, Jessica Winter, Speedboat, Libralibra, Taraka and more for a half-dayer not to be missed!

Electronic polymath BABii (aka Daisy Warne) dropped her collaborative mixtape SCREAMER on 27th July. Featuring collaborations with a wealth of influential producers such as Iglooghost, umru (Charli XCX, Dorian Electra etc), SV1, Jennifer Walton (Kero Kero Bonito) and Warpstr (Yung Kayo, Yeat), SCREAMER has been created both sides of the Atlantic however it takes a heavy influence from British dance music with musical touchstones from bassline, garage and DnB.

BABii will take this energy on the road for a club night tour of the UK in September with Pholo DJing for her set. Playing tracks from the mixtape as well as select tracks from her previous releases, the shows will be the most high energy sets she has ever played.

Jessica Winter sits outside genre, scene or group, defined not by sound but by song. Much of her childhood was spent in isolation, looking out of the window from her hospital bed, from which her vivid imagination grew into a universe. Jessica’s inspiration is drawn from robust daily experience and traverses sounds from the 80s to present day. Previously supported by Dazed, Wonderland, Annie Mac BBC Radio 1, Mary Anne Hobbs BBC 6 Music, KEXP ‘Song of the Day’, KCRW as well as touring with Death Grips & Lynks.

Speedboat
After spending all their musical lives apart, siblings Johnny and Will Griffiths finally started writing
together at home in 2017. Initially rejecting, and then taking inspiration from their Dad’s collection
of 80’s pop, indie and new wave the brothers settled on the name Speedboat as something which
encapsulated their widescreen new wave inspired synth pop. Working from their flat the pair would
swap duties on vocals, guitars, synths and keys and with the writing and recording blurred into one
process they produced something surprisingly expansive and cinematic.

Libralibra
“Anti-authoritarian and resolutely individual, LibraLibra come bursting out of the traps at every opportunity, constructing these rattling, roaring blasts of sound.” – CLASH

A chaotic postmodern Frankenstein’s monster, LibraLibra sits simmering in the fractured space between art-pop and punk. From bursting house parties, to supporting Psychic TV at Heaven, to headlining the Brighton Dome, LibraLibra is a DIY collective with an uncompromising creative vision that holds up a cracked mirror to the chaos of modern life.

Taraka
Since the breakup of the legendary underground cult duo Prince Rama, former frontwoman Taraka started recording songs that sound like the vivid visions of the disturbed daughter of Kate Bush and Johnny Rotten who drank ayahuasca at the gates of Warped Tour ’02, merging bastard elements of outsider-psych, post-edenic grunge, kaleidoscopic punk and post-adolescent angst.

Gloop Unit
The origins of Gloop Unit are unclear, however their nebulous melodies and celestial rhythms have led some astro-bio-musicological experts to believe that they were birthed as a result of a rare wave-particle interaction in the ether of one of the lowest theoretically plausible dimensions. Having spent several Earth-years stockpiling jazzy micro-influences, beats from around the house, and morsels of cosmic punk that blew in through the window, Gloop Unit’s so called ‘unidentifiable-sonic-mega-gunge’ has now caused moderate commotion amongst the humanoid population.

SAD DADS
Curators of Shitepop and featuring members of the excellent Hutch. They don’t play often, so don’t miss out!