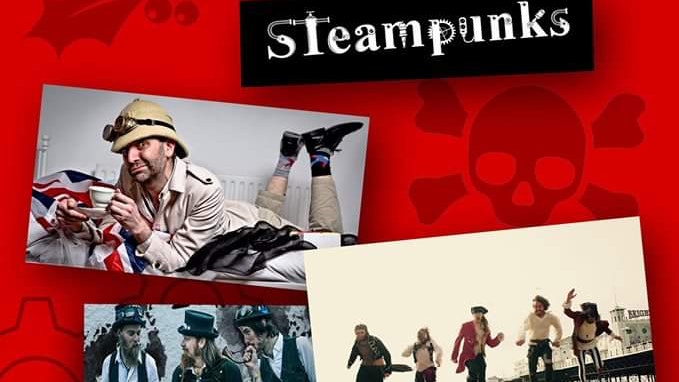 The Hope & Ruin
18+
Share
Buy from Fatsoma
Buy from WeGotTickets

We are not going to say the “C word” but it cometh none the less and it might cheer you to know that steampunk legend Professor Elemental and Pirate folk rock band The Captain’s Beard are teaming up to give you a jolly good evening at the Hope and Ruin. It’s Pirates vs Steampunks!

If you know neither of us do read on!

Welcome to the world of Professor Elemental. An award winning hip hop artist and accomplished host, the Professor has performed all over the world at everything from festivals to wedding parties, hip hop shows to bizarre burlesque. A regular on the worldwide convention and festival scene he has played everywhere from Canada to Cambodia.
With a career spanning a decade, Professor Elemental first got noticed with ‘Cup Of Brown Joy’ which notched up over two million views and headlines in the national press:

Along with over ten years of acclaimed albums and live shows, the Prof has also lent his voice to the Disney cartoons, charity  campaigns, advertisements and much more.

The Captain’s Beard are pirate minstrels from the humble fishing village of Brighton. Playing a mixture of rocked up maritime and Irish folk music from the British Isles and original tunes that combine the raucous folk-rock vibes of the Pogues, Flogging Molly and The Drop Kick Murphy’s with all the outrageous comedy of Flight of the Concords. Cue pirates running around a manor:

With the release of their debut album “Same Ship Different Day,” they toured the entire south coast of the U.K and this year they’re going one further, embarking on a full UK tour taking them from Dover to Penzance and from Cardiff to Inverness. They’re looking forward to making you dance, drink and laugh along with them. YARRR!

The Sweetchunks Band are a Southampton based eccentric comedy outfit, performing bastardised versions of songs that you know and brilliant versions of songs that you don’t. They are known for their ability to entertain any audience with a fun, engaging performance that leave people smiling, dancing and humming the tunes for hours afterwards. The Sweetchunks Band create a memorable evening of fun and dancing.