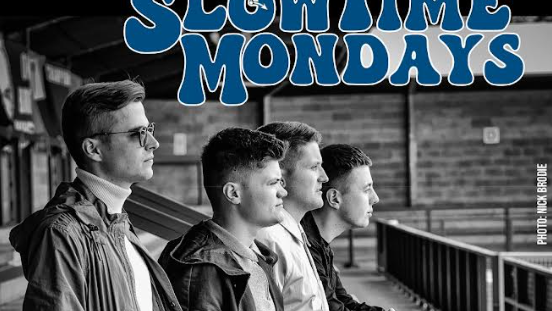 “Visually looking like a new mod band, matched with the ability to turn a tune”  Slow Time Mondays are a 4 piece band from Crawley, West Sussex. Consisting of brothers Billy and Joe Morgan and childhood friends Ryan Scopes and Charlie Wright.   Recently hailed as ‘Crawley’s most exciting export since The Cure’. The band played this year’s Isle of Wight Festival, as well as picking up support slots for Glen Matlock (of the Sex Pistols), The Vapors, The Skinner Brothers, The Clause and many more. Slow Time Mondays are now regularly selling out venues across London and Brighton and have plans to take their show across the country.   Having originally formed in 2016 as a covers band, they quickly began building a large following in their hometown and soon added their own tunes to their repertoire. They released their Debut EP in 2019 followed by several singles, all playlisted and heavily supported by BBC Introducing. Striving for big riffs and catchy choruses, their songs aim to fuse their childhood influences of Indie, new wave Mod and Ska sounds. Their latest singles ‘Rodeo’ and ‘Let’s Make Plans’ are the perfect accumulation of all of those influences.